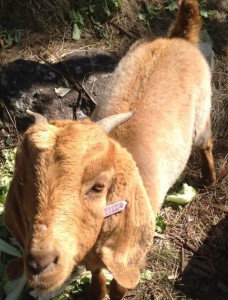 Let’s Make a Deal isn’t part of my childhood, but I’ve heard of Monty Hall. I suspect that of the small percentage of internet traffic that isn’t pornography a fair proportion is devoted to arguments about the Monty Hall problem. If you don’t know the puzzle, it goes like this:

The contestant picks one of three doors. Behind one door is a prize, behind each of the other two there is a goat. Once you’ve chosen Monty opens one of the other doors to reveal a goat. He then invites you to change your choice if you’d like to. What should you do?

The mathematics says you should change. If you stick with your choice you only have a one-in-three chance of being correct, if you change your odds go up to two-in-three. At first glance most people say that your odds of winning the prize with either door is one-in-two. This leads to a lot of discussion, I mean a lot of discussion. Some of the comments run along the lines that ‘the two-in-three answer assumes you have lots of attempts but you only have one go and what if you got it right first time?’ This sort of comment display a lack of understanding of what probability means.

People aren’t good at probability. It’s nothing personal, no one is. It’s certainly not generally intuitive. There a loads of examples around.

When climate scientists talk of highly likely, they mean 95% likely. “Why can’t they be sure?” comes the cry. “It’s still not certain.” Well, no, and very little is. What they are saying is a very specific estimation of the likelihood of something being true; the problem is that only a small fraction of the population has the training to think like this.

The chances of picking 6 numbers in Tattslotto are 8 145 060:1. Ozlotto is even worse at 45 379 620:1. So at one ticket an hour Tattslotto would take over 929 years to win and Ozlotto would take 5180 years. But still thousands of people play because they might get lucky. And they play poker machines where the house has a clear advantage and they believe that they sometimes win, even though the maths shows that the more they play the more sure they are to lose. Don’t they wonder where the money for the free food and the bright lifts comes from?

People are not rational. Perhaps it’s the thrill of believing they’ll get lucky, a belief in divine providence, submission to the opiate of the masses.

The Monty Hall problem, and the endless arguments, have been around for decades now, but perhaps this problem will become archaic. Quite soon, with the coming of peak oil, a car might not be a desirable prize. (Although we can’t be quite sure of this.) One thing’s for sure, my daughter would dearly love to own a goat.