November’s Council meeting was preceded by the AGM. Council AGMs are famous for their lack of popularity; in fact there were moves to remove the need to hold a public AGM. Personally I think it’s a good thing that they’re held, although it is disappointing that no one comes. If you missed the Kingborough one, as you almost certainly did, you can listen to the recording, or just read the annual report. 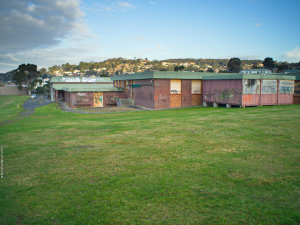 The former Kingston High School and the Council land at Kingston Beach are two big capital items for Council and they were both on Monday’s agenda.

Anyone who’s been around Kingborough for the past several years would know that the Council has agreed to purchase the former High School site from the State Government. At Monday’s Council meeting there was a report on the agenda covering all the activity that’s taken place up to now. It’s worth a read. Obviously most of the buildings have been demolished. The development plan has been on the Council website for over a year and a few months ago a video went up that flies you through a mock-up of the proposed buildings. Less obvious is the planning and design that’s taking place. The project is being run by Council in a similar way to a commercial development. What’s different is the dependency on other parties. If you or I had the money and had bought to site we’d build whatever we wanted and whatever the Council would let us get away with. Council had to cooperate firstly with the State Health Department and secondly with the community.

Council hasn’t yet paid for the site. Payment will be triggered be the State Government starting work on the Kingston Integrated Health Centre. The delay between a Government project being announced and built is elastic, to say the least.

Things that interest me are how much involvement the Council will have in the residential and commercial developments in the site. At one extreme we could sell off parcels of land and, provided they meet the planning scheme, allow whatever development comes along.  Another way would be to make some specific requirements, enforced through the planning scheme or through covenants on the land. I wonder if we could make the former Kingston High School an excellent case of sustainable development; if we ensured that all building were built to the highest environmental standards to maximise their suitability to a changing environment, not just to make the maximum short term profit. 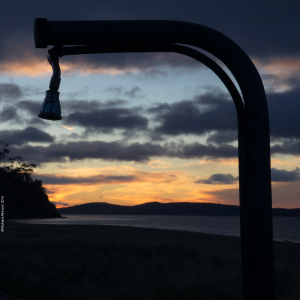 At Kingston Beach, near the shops, at 25a Osborne Esplanade, the Council has a toilet block. Built of concrete blocks it’s showing its age. I enjoy the way one can watch the beach through the perforated blocks while standing at the concrete urinal and the brutalist style of the change room has a distinct charm reminiscent of Eastern European architecture of a simpler time. It no longer, however, meets community expectations and so will be replaced.

The block of land on which it stands is large and in a prime water-front position. Further, council has purchased the rear of an adjoining block to give access from another street. Council asked, whosoever can come forth and build us a toilet to alleviate the masses, may reap the spoils of this sublime place. Accordingly several people did come forth and Council liked some of what it saw. Council is now developing a memorandum of understanding with the Kingston Beach Surf Club and a group of restaurateurs.

There are still lots of details to be agreed, but at least now the discussions are in the open session of Council so the community can hear what’s going on.

There were several other items that you might find interesting at Monday’s evening, Mayors for Peace, Adventure Bay Toilet block, extension of a permit for a subdivision at Blackmans Bay that doesn’t meet the Interim Planning Scheme, and the Tasmanian Planning Scheme. The agenda, minutes and recording are on the Kingborough Council website.

I want to mention a couple of excellent events I went to this weekend. 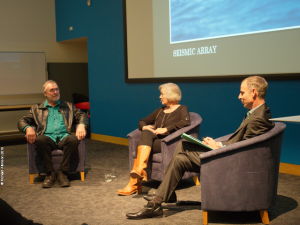 First is the Conversation with Colin Russell, hosted by Senator Nick McKim last Friday evening. Colin was the radio operator on the Arctic Sunrise when it was boarded by the Russian special forces while Greenpeace was protesting against oil exploration in the arctic. He became one of the Arctic 30 and spent 72 days in Russian jail before being finally released. Chrissy, Colin’s wife, was in Woodbridge and only receive intermittent updates on what was happening to her husband on the other side of the world as he negotiated the Russian legal system. This was a fascinating event. If you ever get a chance to hear Russell speak about his ordeal I highly recommend going along. 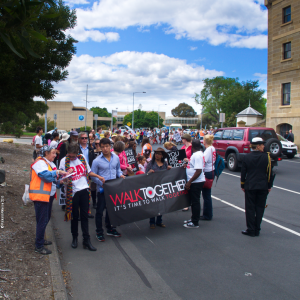 Walk Together is an annual event held around Australia to celebrate our cultural diversity and to show community acceptance of new migrants. The walk in Hobart this year was from Princes Park to Franklin Square. It was heartwarming to listen to the Governor, State MPs, the Lord Mayor of Hobart and local people both first and fifth generation speak about the warm welcoming place that Tasmania can be. 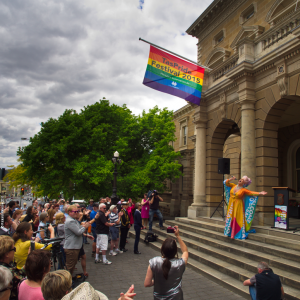 This Saturday was the start of the TasPride Festival, the annual LGTBIQ celebration in Tasmania. The Hobart City Council recognised the occasion by flying the rainbow flag over the town hall. I went to hear the Lord Mayor, the Governor and Tasmanian Australian of the Year, Rodney Croome AM, speak about the massive progress that has been made in legal and social recognition of gender and sexual diversity in Tasmania.

And so ends quite a busy week. The other news this week was that the Legislative Council passed the Land Use and Planning Approvals Act with amendments so it will now go back to the House of Assembly. This is the enabling legislation for the new Tasmanian Planning Scheme. More to come.