Last week started with a briefing from the Department of State Growth on the Bonnet Hill Safety Lane and finished with the Australian Greens National Conference and a committee meeting. 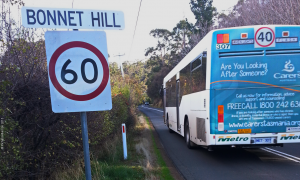 Department of State Growth staff are well underway with the design work on widening sections of the shoulder of the Channel Highway between Kingston and Taroona to make it safer when cars are passing bicycles and pedestrians. The local community have been lobbying for this project for several years. In June 2015 the government announced that funding would be made available. It’s one of several similar projects around the state. The government are taking advice from Bicycle Network on which ones are priorities.

The work for this year is planned to take place in four stages. Part A is the south end, up from Proctors Road. This should start in December and take around a month. Then they’ll move on to Part B at the north near the Shot Tower. Part C is that nasty left hand bend before the long straight and part D is the bus stop at the top near Sedgebrook Road at the top of Bonnet Hill. They’re planning to keep the work outside peak commuting times so as not to block traffic and buses too much. Hopefully the first two parts will be completed within the school holidays. All this might change, literally with the weather. The best place to find details is on the transport website. 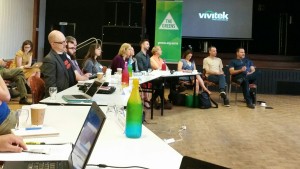 From Friday 6 to Sunday 8 November I attended the Australian Greens National Conference in Adelaide. I’ve recently become a state delegate for Tasmania. This was my first National Conference. I met several people who I’d only dealt with by phone, email or Skype. I also got to know interstate delegates and observers and broadened my knowledge of how the party operates and the issues faced by members in other states. Nearly all the Greens senators attended for at least part of the time, as well as the federal member for Melbourne, Adam Bandt, and some state and local elected representatives.

The national Greens leader, Richard di Natale spoke convincingly on several current issues and the senators present spoke about initiatives in their portfolios. The conference was a mixture of discussion panels, policy workshops and budget discussions. The discussions on indigenous constitutional recognition, work in the 21st Century and power-sharing government I found particularly interesting.

One thing that struck me was how much influence members can have on policy. There were no faceless men scheming in back rooms, here were members representing the views of their fellows and holding a civilised debate. Also of particular note was the quality of facilitation of the discussions. The Greens make decisions by consensus rather than vote and it was heartening to see this practice adhered to and working so well.

On Monday 9 November Council had our monthly Planning Authority and Development Committee meeting. The agenda was short with only two items to consider. I was happy to see several members of the public present and even a question from the public.

The first agenda decision was over rezoning of some land at Margate. This was not controversial and passed after a short debate. 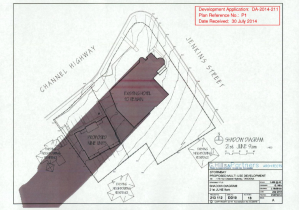 The second item was more difficult. It was a development application for units to be built next to the Taroona Hotel. This was a difficult one for all the Councillors. If you want to hear the whole debate it’s up on the Council website pretty soon, if not already. For me the issue was whether increasing housing density was appropriate in Taroona. The counter-arguments were one of neighbourhood character and overshadowing. The overshadowing was controversial as there were several iteration of shadow diagrams from both the applicant and representors that differed in what they showed.

In the end I voted for the development. I could see no reason not to trust the qualified advice from our planning staff that the shadow diagrams they used were correct and so the application complied with the planning scheme. I also believe that the Channel Highway through Taroona is well provided with transport options, being on a main bus route, having a cycle path soon to be extended through to Hobart by the Hobart City Council, and within walking distance of some local shops. This is exactly the sort of area where we want to increase residential density. Increasing number of residents may also result in more local shops opening. Other Councillors took into account the chance of losing an appeal and that the developer had an existing approved development application for the site that they thought less desirable. The development was approved unanimously.